Today, on October 8, the Russian Orthodox Church celebrates the Feast of St. Sergius of Radonezh, one of the most famous and highly venerated Russian saints, who was a monastic reformer and spiritual leader of medieval Russia. The future saint, baptized Bartholomew, was born in the early 14th century, into a boyar Russian family of Maria and Kirill, who lived in the village of Varnitsy, near Rostov. In 1337, after the parents’ death, Bartholomew and his elder brother Stephen left their home and went into the forest on the Makovets hill, where they built a simple chapel and a small cell. That was the birth of the Trinity Lavra of St. Sergius, which eventually grew into a huge monastic community.

The Trinity Lavra of St. Sergius 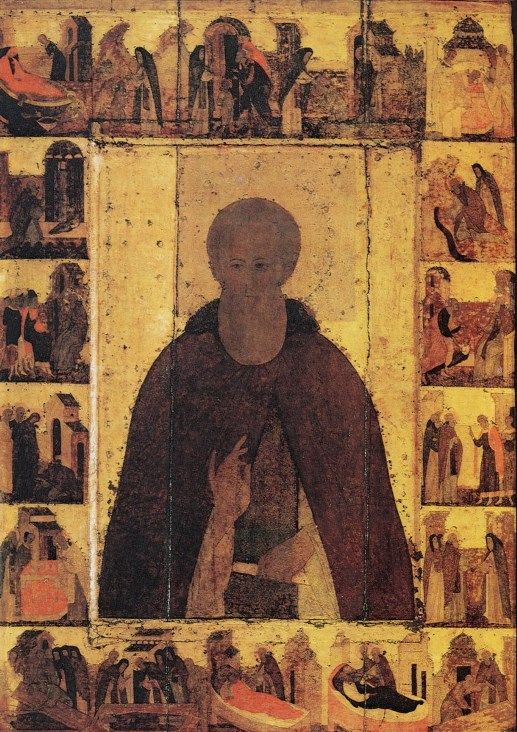 Situated in the town of Sergiyev Posad, the Trinity Lavra of St. Sergius is now one of the largest Russian Orthodox monasteries. Moreover, it is home to many important Russian icons, including the antique icon of St. Sergius of Radonezh with hagiographical scenes (circa 1480), icon of the Holy Trinity (16th century), icon of the Savior Not-Made-By-Hands (1624), icon of saints Zosima and Savvaty of Solovetsky Islands, and many others.

Most Russian icons of St. Sergius of Radonezh show him as an old, white-bearded man, with his right hand raised in a gesture of blessing. He is usually depicted alone; however, the most venerated Orthodox icons also include scenes showing the most significant events from the saint’s life. Such hagiographic Russian icons originate from the very first depiction of St. Sergius’s Vita painted by Epiphanius the Wise in the late 15th century. This antique icon is now part of the iconostasis of the Holy Trinity Cathedral in the Trinity Lavra of St. Sergius.

St. Sergius of Radonezh died in 1392. His relics are currently kept in the Holy Trinity Cathedral. Even though St. Sergius was not a great preacher, nor a learned man, he still takes a special place in Russian monasticism due to his utter sincerity, committed poverty, and numerous miracles. It is no wonder that both modern and antique Russian icons of St. Sergius of Radonezh are so much venerated today and even serve as a source of inspiration and pride to the Orthodox Christian believers from all over the world.